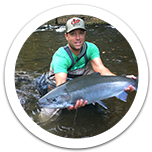 Justin grew up on Eastern Long Island, NY and at a very young age fell in love with the sport of fishing. Justin says “I quickly became addicted to fishing the first time I caught a Bluefish. I remember it like it was yesterday. After that, my parents couldn’t keep me away from the water. I would ride my bike to the creek to cast for stripers, hike down the beach to the good spots for blues, cast off the jetties, wade in the ponds and rivers for trout- it didn’t matter as long as I was fishing. One time when I was in 5th grade and the fishing was really good I played hooky (Ferris Bueller style) and fished for 2 weeks straight until I got caught.” Justin added "I fished so much at a local stocked lake that the fishing club elected me Game Warden!! I was 13!!” In Junior High, he mowed lawns and bought a small aluminum skiff and damn near wore out the rivets from use. Later, in High School when others were saving for cars, he was saving for a new boat!

Justin's passion for fishing only grew with age. Many years later, Justin (now a 2 World Record Stand Up Paddle Boarder in Distance) fishes off his 25ft Contender named the “Cardinal Jump” out of Cocoa Beach, FL, the Jetty’s of Sebastian Inlet, the beach at the end of his street, or on his SUP in the skinny water. He also goes fly fishing for Trout and Salmon every year when the season comes around. Justin dedicates a lot of his time to the APEX predator shark tagging program for NOAA. In 2017, Justin tagged over 50 sharks for NOAA! In 2018, Justin also started working with the Dolphinfish Research Tagging Program.

In 2016 Justin took 2nd place in Wahoo at the East Coast Shoot Out, 4th in Mahi-Mahi in the k92 and 2nd in the Ron Jon’s Catch & Release SUP tournament. In 2017, Justin took 4th in Mahi-Mahi at the East Coast Shoot Out. In 2018, Justin took 3rd place Redfish & 2nd place Overall in cumulative in the Salt Life/Costa/Bote SUP & Kayak Tournament, and 3rd place in the Port Canaveral month long Cobia tournament.

Keep yourself up to date with special offers and events