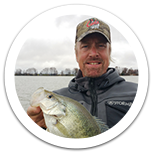 Garrett Steele is a Country Music Recording Artist and nationally ranked Pro-Angler from Nashville TN. The born and raised Texan is very blessed to be able to blend two lifelong passions and talents, singing and fishing. With a 2nd place finish being his best tournament finish to date, he has been nationally ranked as high as 6th in his first 4 years of being on the Crappie Elite tournament trails. Garrett’s management team, NY-LA-NASH Entertainment, represents him for music AND fishing. Teddy Gentry of the super group ALABAMA produced his music that was available at Cracker Barrel’s Nationwide. A few artists Garrett has shared the stage or mic with are Dolly Parton, Teddy Gentry and Jeff Cook of ALABAMA, Steve Wariner, Steven Curtis Chapman, Lee Greenwood, Heidi Newfield, Larry Gatlin, Cowboy Troy, Andy Griggs, Bill Anderson and Wynonna. Garrett also had 2 songs nominated for Nashville Universe “Song of the Year” and was nominated for “Male Artist of the Year” in 2016.

Like many of the pros, you will see him conducting seminars, giving how-to’s, and fishing the 2 elite Crappie tournament trails on the Pursuit channel. The additional TV, radio, and appearances that management secures for him because of his music is an added bonus for this Yamaha Title Sponsored artist/angler and his 20+ national, regional & local sponsors. Beginning in 2018, Garrett will be the “Crappie Guy” sharing his “Crappie Notes” for Midwest Outdoors Magazine, now in its 50th year. He will also be heard on MWO podcasts as well as doing a little co-hosting for the 30 year old Midwest Outdoors TV show.

Garrett has also fished with Canada’s #1 fisherman, Bob Izumi, in an entire episode of “Bob Izumi’s Real Fishing Show” that ran on Global TV network as well as WFN in the US. Garrett has appeared on the following networks in 2016 and 2017: ABC, NBC, CBS, FOX, WFN-World Fishing Network, Pursuit, FOX Sports, ESPN & Global TV.

While Garrett has also been a part of Bass Pro Shops Crappie Madness, he is also interested in the broader picture of fishing, boating, and conservation. He loves educating and encouraging people to get outside. One way is through his appearances at the FLW Ambassador Events at Wal-Mart’s Nationwide. Media has labeled Garrett as one of the “Ambassadors of Crappie Fishing”. He fishes 2 Professional Tournament trails, The American Crappie Trail and Crappie Masters, approximately 14-17 tournaments annually. He’s honored to have performed for Cast 4 Kids, Children’s Miracle Network and helped raise over $1million for the Make a Wish Foundation. Garrett has been a proud member of the Cuda Brand team since 2015.

Keep yourself up to date with special offers and events